Not so long ago that, for example, cinemas, the industry began to present screens capable of generating 3D images. In a nutshell, this means that a person is able to view certain content on the screen with a perception of deep depth, making him feel that the image in focus is, in fact, in front of him. According to the definition by Abbreviationfinder, 3D stands for three dimensions. 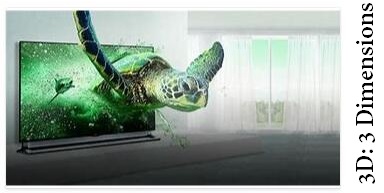 Such screens are more sophisticated and, consequently, more expensive. Many of them require the use of special glasses for viewing three-dimensional content, although the market already has devices that do not require the use of these devices. An example is the Nintendo 3DS portable game console .

Basically, 3D content is formed by the simultaneous display of two identical images, but slightly shifted horizontally. Each image is captured individually by each eye. This whole process generates the perception of depth. Realize that, with this, people who have one of the compromised eyes end up not being able to “join” (converge) the images to visualize the material as being in 3D.

In cinemas, the glasses used are of the passive type. The type of glasses that became more popular is the one that uses a lens in blue and the other in red. The red lenses are able to “cancel” the tones of this same color coming from the image. The blue lens does the same with its tones. This scheme manages to generate a sense of depth.

However, it is more common to find polarized glasses in cinemas. These have lenses that filter the passage of light from certain angles. This type of glasses has become common because it displays colors more faithfully.

In the case of 3D TVs, the use of active glasses is more common. These are generally formed by lenses that use LCD technology or even Plasma that are transparent and opaque according to the 3D content displayed, so that the right eye is not receiving the lights when images for the left eye are shown and vice- versa. This happens extremely quickly. In addition, the glasses communicate with the TV via some wireless technology (usually, infrared or Bluetooth) to “know” when to turn the light on or off for each eye.

In the case of equipment that does not require 3D glasses, there are several “tricks” that can be used, however, it is more common to use screens that have an extremely small lens layer, where part of them directs the image to the left eye and, the other, for the right eye. Such lenses are arranged interchangeably. The problem is that 3D content needs to be made available in a manner compatible with this scheme for the three-dimensional effect to work.

3D screens can be offered in the technologies covered here, being more common, in the case of televisions, on LCD and Plasma panels. Realize that it is not any type of equipment that can display three-dimensional images; it is necessary that the device is prepared for this. In addition, content – like a movie – must also be compatible.

Note that the brain ends up having to work harder to be able to focus and converge the images, so, not infrequently, a person can get tired more quickly when viewing 3D content.

Gorilla Glass technology is one of the items that differentiated the iPhone at its launch. It is so important for this line that the story of its use was even told in the biography of Steve Jobs, since the executive was directly involved with its adoption.

Jobs wanted the iPhone screen to use glass instead of another transparent material. The problem is that glass is a component that can be scratched or broken relatively easily. As a result, he started looking for some highly resistant glass technology.

It wasn’t long before Jobs found Wendell Weeks, who ran the Corning Class company . Jobs explained what kind of glass he was looking for and, to his happiness, Weeks revealed that his company developed technology in the mid-1960s that could meet his needs.

Wendell Weeks was talking about a type of glass made with a chemical process that made it quite resistant, therefore, with much less chance of being broken or scratched. The problem is that this type of material has not found application in the market, causing Corning Glass to stop producing it.

That’s how Gorilla Glass appeared as a new technology. Jobs only took the trouble to convince Weeks to manufacture the glasses for the iPhone. Despite the uncertainties of the Corning Class manager, the first batch was delivered after approximately six months.

Currently, it is possible to find Gorilla Glass technology being used in smartphones, TVs, tablets and other devices produced by several manufacturers.

As Gorilla Glass technology does not make products significantly more expensive, purchasing a device that uses it can really be worth it.